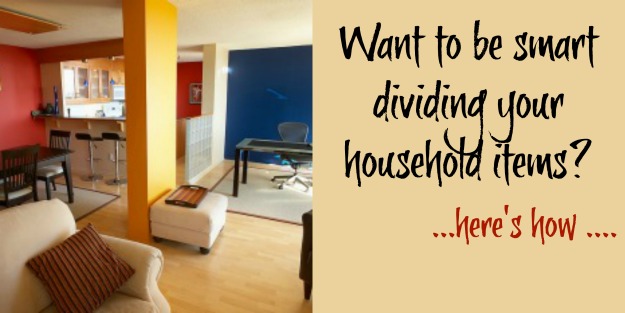 Most attorneys will tell you that it’s never worth fighting over household items and with an eye on saving on the legal expenses, your attorney may offer very little guidance on how to actually go about this task other than to tell you to value everything at what you would get if you put it out on your front yard with a for sale sign on it. The value is not what you paid for it and nor is it what it would cost to replace it.

Most people I speak with get this but it doesn’t make this task any easier. It’s still riddled with emotions, concerns about equity and it can just be plain hard to let go. To make matters worse, what you don’t take, you may have to replace for your new home and that makes the cost of your break up increase further.

One reason it’s so challenging dividing household items amid divorce, is that like so much else about divorce, you’ve never had to do it before and so you just don’t know how to approach it. And how you approach it can make a big difference in reducing the conflict.

Joining me for this Conversation is founder of FairSplit, David MacMahan. FairSplit is an online solution to listing and fairly dividing assets in a divorce. Listen in the Conversation below (email readers click here) or keep reading …

MacMahan started FairSplit after his own divorce. Both he and his wife were committed to focusing on the children and there was no animosity. Like many of us, they were not in a financial situation to go out and buy whatever. The reality was that they needed to create two homes from the contents of one home.

Working through the division of their household items, MacMahan said that what came through the most was the emotional attachment mostly to things connected to their two children such as the bunk beds, the chest of drawers that the aquarium sat on.

The fear for both him and his wife was that whoever had the familiar items, that would make their home more attractive to the children and so that parent would become the preferred parent. While he admits that that fear was probably unfounded, it is nevertheless a fear that many parents have going through this process.

There’s no one answer to when to start dividing household items amid divorce. Often, people start doing this as soon as one party is moving out of the home and needs some of the items for their new home. However, since the new home is often smaller, and temporary, that person may move out and choose to leave everything in the marital home especially if the other person is keeping the marital home. This may be a practical consideration but MacMahan says that sometimes there’s a guilt factor involved.

MacMahan says we tend to talk about this in a very linear fashion when in real life, people aren’t functioning in a linear way. How people work through this is very individual.

Waiting for a period after the decision to end the marriage and starting this can also be beneficial. “If there’s a little time between when you’re dividing the household items and ripping the band-aid off, then everything seems to have less emotional charge.”

My suggestion is that before you actually start deciding who is going to have what, discuss what process you will follow and in particular how you will handle items that you both want or just as important, items that neither of you want. Whether you choose to follow the process we discuss here or this one, getting agreement on this from the start will save you anguish and stress later when you both want the Oriental rug.

MacMahan suggests that you start with one person making a list. When he was going through his divorce, he made a spreadsheet of everything and sent that to his wife, suggesting that she go through it marking everything that she wanted.

Some people try to make the list together but MacMahan doesn’t favor this approach. “Walking through the house is a painful thing to do with your spouse,” said MacMahan. “It’s like you’re dividing up loving memories.”

At this stage you don’t have to be concerned with physically separating the property. That’s a separate step.

MacMahan got divorced in California and said they had to submit their list of household property to the court and even though it was a legal requirement to have a list, he said they didn’t get much guidance from their attorneys. “The attorneys don’t get involved in it,” said MacMahan. “They just hand you a legal pad and say go write down all the assets, some values and you guys split it up.”

As unhelpful as that was, MacMahan admits that it’s probably not worth paying an attorney to dig into the details.

You Decide The Detail

When I’ve discussed this with clients and suggested making a list, I often get groans and eye rolls and “do we have to list every item?”

No you don’t. This is about what will work for you and your STBX. You can list general categories such as kitchen gadgets, power tools, camera equipment. If particular items are important to either party, such as the set of blue towels, that’s when you’re going to get more detailed.

The next step is for you each to go through the list marking the items you each would like.

The methodology that FairSplit uses for this is to assign each party points they can use to bid on the items. So you each start with 500 points and assign points to the items that you’d like. One party might use all of their 500 points to bid on the dining room set, while the other party spreads their points out over a number of items. The items are assigned to the person who bid the most points.

This bidding process quickly identifies the emotionally charged items and gets them out of the way.

“What we’ve found is that after you’ve taken the emotionally charged items out of the formula, then the parties are fine with just taking turns because the other things don’t matter as much,” said MacMahan.

If you both want a particular item and it can be replaced, then consider letting it go. If it has some value, you might ask for a financial adjustment in another area.

When parties are concerned about the fairness of the division and you do need to go through and assign a dollar value to everything, consider using an independent third party, such as an estate sales company. It likely wouldn’t take long to do because that’s their business and they are used to doing it. The cost of paying someone else to do it may be well worth it in reducing the conflict and further arguments about the value of specific items.

Using third parties may also be necessary when there are protection orders in place and one person is barred from coming into the home. Indeed, a court may even order using a service to assure equal access.

Deciding who gets what and then physically separating the items are two separate steps but people often forget to agree on the latter. Even when the home is being sold and everything has to be moved, it can still be a fire drill when one party hasn’t made arrangements and is dragging their feet while the other party is trying to make sure there isn’t a problem at the closing.

Delaying the separation of items can sometimes be a practical consideration such as when the other party is staying with friends and doesn’t have room for their items or they’re just going slower to inflict more pain.

There are two ways to approach this: the carrot and the stick.

MacMahan says one idea would be, ‘Hey, I’d really like this out of here. I’ll kick in an extra $500 if you get it out by the end of the month.’

The stick approach would be to build some language into your legal paperwork that says that if the other party has not removed all of their assigned items by a specified date, then the party who currently has possession is free to dispose of the items as they choose and any payment they receive for the items is theirs to keep.

Don’t Get Stuck With The Trash

After you’ve decided the items you each want and you’ve resolved the items you both want, there’s always all the stuff neither of you want. Frequently, the longer you’ve been in the house, the more items in this category you can expect.

The burden of getting rid of these unwanted items often falls on one party especially if the other party has already moved out. MacMahan says again, this is where a third party estate sales company can help. They know what organizations in your area will take which items and who will pick up what. That might be much more cost effective and less stressful than you learning all this from scratch.

Sites such as CraigsList and NextDoor are also great ways to dispose of unwanted items especially if you’re giving them away.

My guest for this Conversation was David MacMahan. After going through his own divorce, David put his experience into creating FairSplit, an online solution to listing and fairly dividing household items amid divorce.